All 4 PRA cars competitive in practice

Prodrive Racing (Australia)'s Chaz Mostert has made a successful return to Mount Panorama in practice at the Bathurst 1000,  finishing third in the day's final session.

The Supercheap Auto Racing FG X missed half of today's first 60 minute practice, with the car suffering from a drive line vibration.

Times dipped below the 2minute 5 second mark early in the day with the fastest time ever on Thursday at the Bathurst 1000 was recorded in practice three.

Progress was also positive for The Bottle-O Racing pair who debuted their celebratory livery on track today.

Dean Canto led the charge for much of the co-driver session ahead of an 11th place finish for Winterbottom in the final session.

Despite strong form for much of the day, tyre quality hurt the pair ahead of their green tyre run, giving them a false read on the track.

Monster Energy's Cameron Waters is pleased with the pair's practice results as they make inroads with the car. Waters, who has been strong at Mount Panorama in the past, is confident changes overnight will push the pair further into the top ten.

Richie Stanaway made a strong debut at Mount Panorama, cutting his first laps ever at the Bathurst circuit in practice.

Chris Pither says the pair will work to make further changes to the Super Black Racing FG X ahead of qualifying.

DRIVERS’ VIEW
Mark Winterbottom & Dean Canto - #1 The Bottle-O PRA Ford: 11th – 2m06.09s
Dean Canto: "Today's co-driver session was pretty good for me. We managed to tune the car up throughout the session and ended reasonably up the front in fourth. There was still room to be improved with the car at the end of my session. It's one of those things with tyre quality before you go to a green tyre where you're sort of always unsure. You know the kilometres of the tyre and you think they okay but they might not necessarily be which caught Mark out in his session but for myself I'm comfortable in the car. I've been around here plenty of times so as long as that's all good and everything's working well, driver changes are fine, we'll press on."

Cameron Waters & Jack Le Brocq - #6 Monster Energy PRA Ford: 12th – 2m06.30s
Cameron Waters: "Fairly happy with our first day at Bathurst. I just crept up on it but both Jack and I are struggling with the rear of the car a little bit which is hurting our confidence a bit. If we can fix that for tomorrow we should find a pretty good chunk of time and hopefully we can be in the top ten for the shootout."

Chaz Mostert & Steve Owen - #55 Supercheap Auto PRA Ford: 3rd – 2m05.70s
Chaz Mostert: "We've just been minding our business a bit today. Just getting back into the groove of the car and getting around here. I felt that in the middle of that session that we probably went a bit wrong with our direction with the car and our engineer had a pretty big swing at a few things here and there and I think towards the end, we're definitely going down the right path now with the car we just have to use the practice sessions tomorrow to keep going down that path and see just how far we need to go down it. Overall I'm really happy with the day. The car seems to be pretty fast down the straights which is something we struggled with at Sandown so there are a lot of positives, we just have to tune it up and I just want to get through a qualifying session so we'll see how we go tomorrow afternoon."

Chris Pither & Richie Stanaway - #111 Super Black PRA Ford: 22nd – 2m07.49s
Chris Pither: "Overall I'm relatively happy with how practice one went. We lost a bit of direction in practice two and didn't manage to step up. I think we've made a reasonable start that we can build on throughout the weekend so there are a couple of things that we can work on tonight to improve for tomorrow and I think we'll be in good shape come Sunday. Richie went well. It was just a matter of getting laps in the car for him because it's the first time he's driven here but he did well."

Tim Edwards – Team Principal:
"We tried a lot of different things with the cars today. We had a couple of little troubles earlier in the day but by the final session I think we ironed those out fairly well. The times are already quite quick out there but I think everyone is doing a good job. We didn't want to waste the tyres at the end of the final session so they only really got one flyer in each but I think we have a good read on the cars and a good direction for tomorrow."

DUNLOP SERIES
Prodrive Racing Australia's Dunlop Series leading duo have completed their first practice session on Thursday at the Bathurst 1000 with Jack Le Brocq and Garry Jacobson both finishing inside the top five. It was a battle for second place between the two PRA drivers for much of the 40 minute session before final flyers were set. Jacobson has confidence in the speed of his car but will chase rear stability ahead of tomorrow's qualifying session, while Le Brocq believes the GoGetta Ford is capable of pole-winning speed. 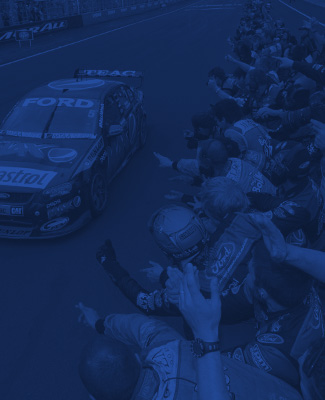