Roller Coaster Ride for FPR on the Gold Coast

The quartet of Orrcon Steel-backed V8 Supercar drivers endured a roller coaster ride during the Armor All Gold Coast 600 on the streets of Surfers Paradise in Queensland across the weekend.

After qualifying strongly inside the top ten yesterday the campaign for both Orrcon Steel-backed FPR Falcons, driven by Mark Winterbottom and Steve Richards with co-drivers Luke Youlden and Will Power, had a disappointing run after being involved in lap one incidents during yesterday’s race.

Following a long night of work by the Orrcon Steel-backed Ford Performance Racing crew, where they completed significant repairs to both cars, Winterbottom and Richards rewarded the team by completing a front row ‘lockout’ during this morning’s qualifying.

Richards and Youlden fired off the start line to lead the field into turn one before continuing to run strongly inside the top three for the opening segment of the race. When a safety car period emerged on lap 15 the team took the opportunity to allow both cars to pit.

Unfortunately, a mishap with the driver change in the Orrcon Steel-backed #6 Dunlop Super Dealer FPR Falcon also significantly halted the progress of the #5 Orrcon Steel FPR Falcon dropping both pairings well down the order.

After returning to the track in effectively last position Youlden, and later Winterbottom, drove with determination to slice their way through the field before claiming third place at the chequered flag.

Like their team-mates Power and Richards were also on the fight back trail and were running as high as fifth place during the middle of the race. However, as the field cycled through the numerous safety car periods and subsequent pit stops they dropped to 13th place at the finish.

With three events left in the 2010 V8 Supercar Championship Courtney remains at the top of the points standings on 2521. Whincup is second, 71 points adrift of Courtney, followed by Craig Lowndes (2255) and Winterbottom (2201). Richards is 18th on 1117.

The next race on the Falken Tyres Tasmanian Challenge at Symmons Plains Raceway in three weeks time (November 12 – 14).

"I think I was driving with a bit of aggression at the end there because I was pretty annoyed when I hopped in the car. It was good to get a podium and reward the guys in the team for all of their hard work after the effort they put in following yesterday's disappointment."

Luke Youlden – #5 Orrcon Steel FPR Falcon
"It's a phenomenal result really, at one stage we were dead last after the bungled pit stop. We really had to keep out chins up and just keep fighting," said Youlden.

"After the disappointment of yesterday it was great to get a result which saw us finish on the podium today. Half way through today's race you could have been mistaken for thinking our chances were gone but Frosty drove extremely well and towards the end in a pressure filled race he was putting in some very quick times while battling hard at the front of the pack.

"A podium finish is an awesome result for the team when everything is considered."

Steve Richards – Orrcon Steel-backed #6 Dunlop Super Dealer FPR Falcon
"It's disappointing because after the fantastic start we had today, we let a result slip by," said Richards.

"The good thing is that we showed good pace this weekend, the car was excellent all throughout today's race and we came away with some points but nowhere near what we were after.

"I think the international format is fantastic, I really had a great time with Will this weekend to have a driver the calibre of him sitting alongside for the weekend is terrific. We shared some stories, had some good laughs and all in all it has been a pretty enjoyable weekend."

Will Power – Orrcon Steel-backed #6 Dunlop Super Dealer FPR Falcon
"Yesterday was a disappointment and today I thought we had a pretty good car - good enough to finish right up there," said Power.

"During the race we were in traffic a lot, I got a clear run there for a while which was good so I could really feel my way out there. Just being able to get laps in a V8 Supercar was good.

"I just crept up on it and learnt a bit more about the car all weekend, the braking capabilities and the characteristics of the car in race trim.

"If the opportunity comes up again I'll definitely be back to race. Hopefully with more experience and maybe a bit more testing. I had a lot of fun this weekend and really enjoyed myself." 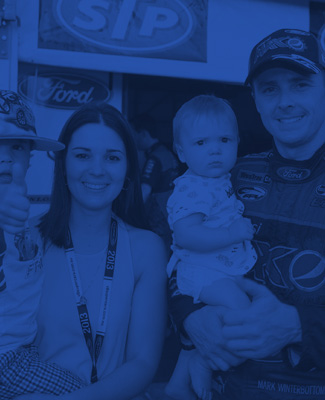